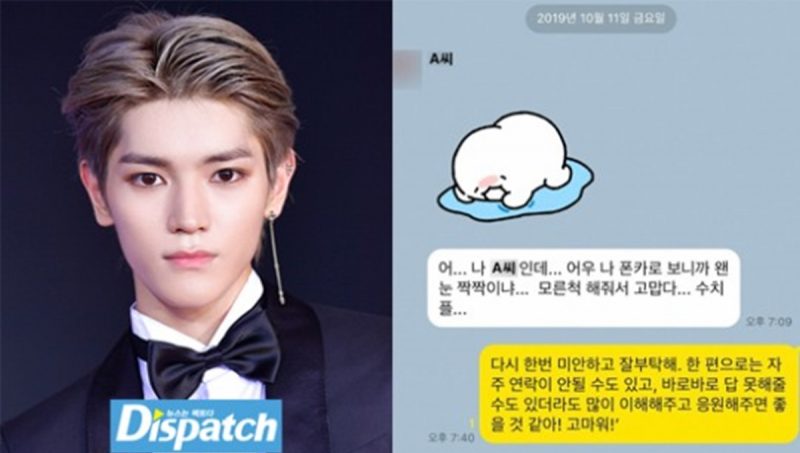 There are three characters in 'NCT' Tae Yong's the controversy over words and actions (May 2, 2009). Victim A, Victim’s friend B (tip-off), and idol singer Tae Yong.

First of all, we need to get to know the case of <Taeyong Controversy> and move on. In some media, the self-harm controversy and the sexual minorities controversy expanded and reportedly distorted.

The beginning of the incident started on May 2, 2009. This is the comment that Taeyong left in the Internet cafe (middle school) "The Superior Class 4." It happened when Taeyong was in the second year of middle school. 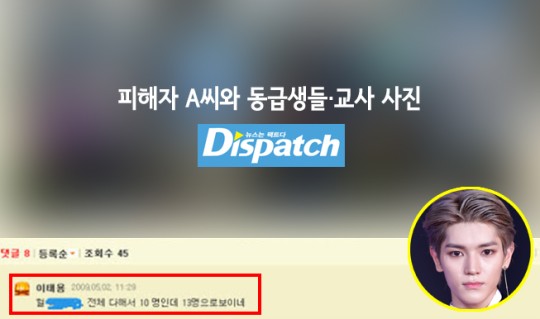 And 10 years have passed. B posted a message titled <Facts about Taeyong Classmate> on September 17, 2019.

Summarizing the writings written by Victim’s friend B (tip-off),  ① I'm the Internet cafe operator, ② I'm ignorant of derogating a fat person at the time, ③ I'm sorry for pulling out the past, ④ Still, what Taeyong did was wrong.

Taeyong announced the apology through SM, his agency.

"Taeyong deeply regrets saying indiscriminate behavior and hurtful words in middle school. He mentioned that he apologizes to everyone who was hurt even after his trainee days and debut. He still hasn't forgotten how he feels about it."

He also met the victim A in person. Below is what A posted directly on his SNS. 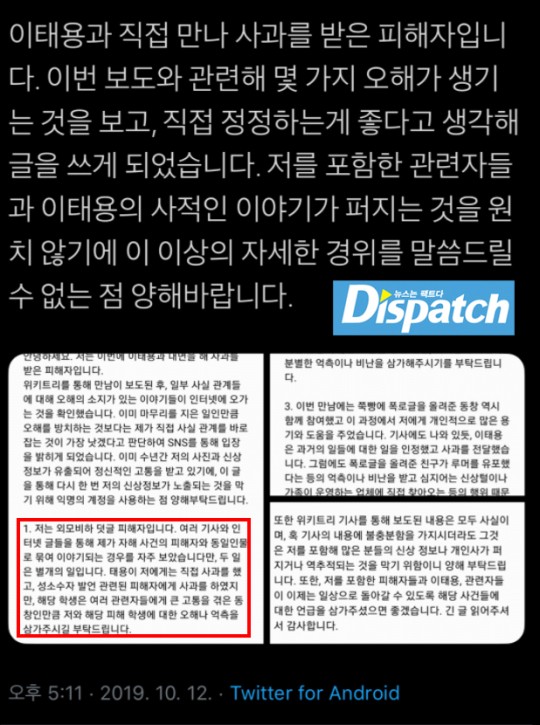 Taeyong's side also delivered a kind of "consolation money." " A also goes to the hospital," referring to mental damage. Taeyong paid compensation. 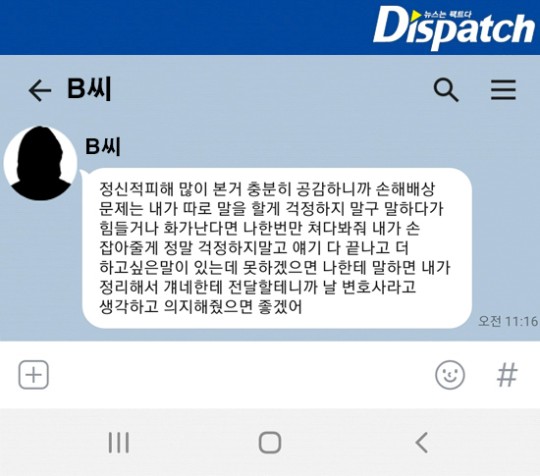 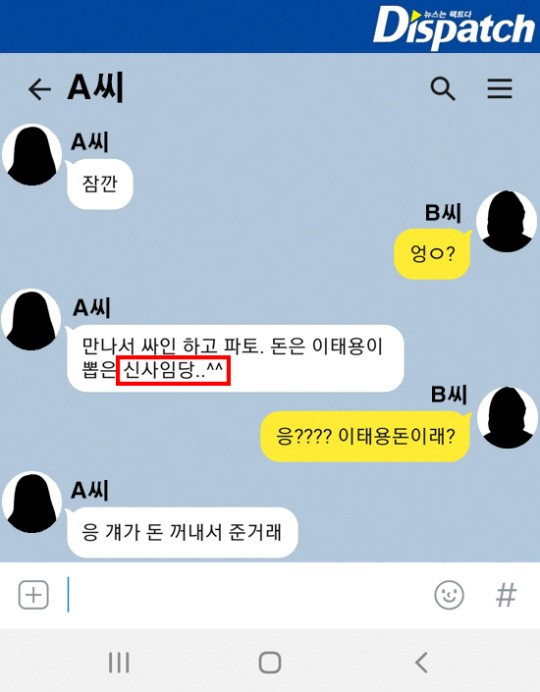 The controversy over Taeyong's words and actions ended with reconciliation until June 2020.

Victim’s friend B (tip-off) is back. First of all, B appealed for restraint from the fans. B also said that it was difficult. Then B turned the arrow to Taeyong. "Actually, it was like this," B started posting Kakao talk.

B claimed that there is no sincerity in Taeyong's apology. As the evidence, the victim A released a text message he sent to Taeyong on October 28, 2019. 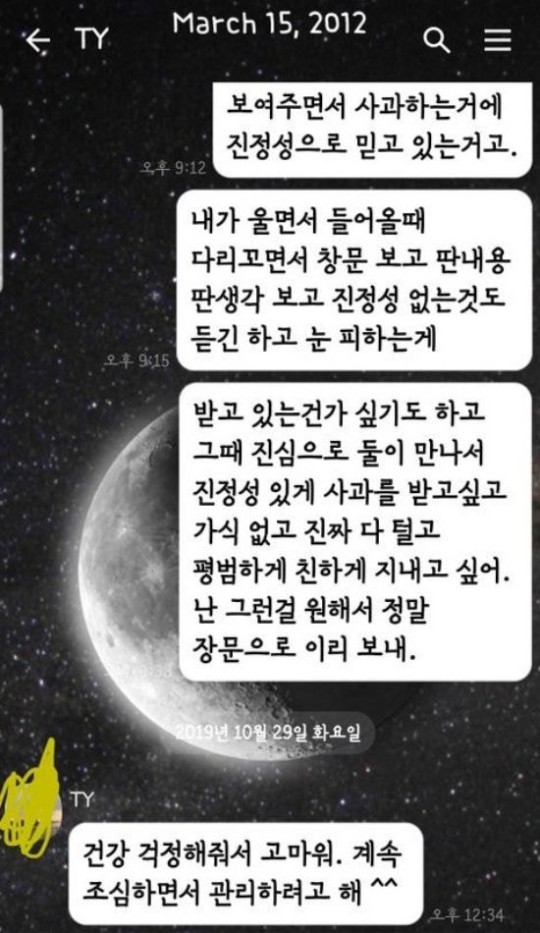 "When I (the victim) came in crying, you cross your legs and looked at the window... I want you to meet then and sincerely receive an apologize, and I want to be friends without pretense, so I send you a long text message."

'Dispatch' obtained the original dialogue. Kakao talk, posted by B, was an edited version. A was worried about Taeyong's health just seven minutes ago (9:08 PM). 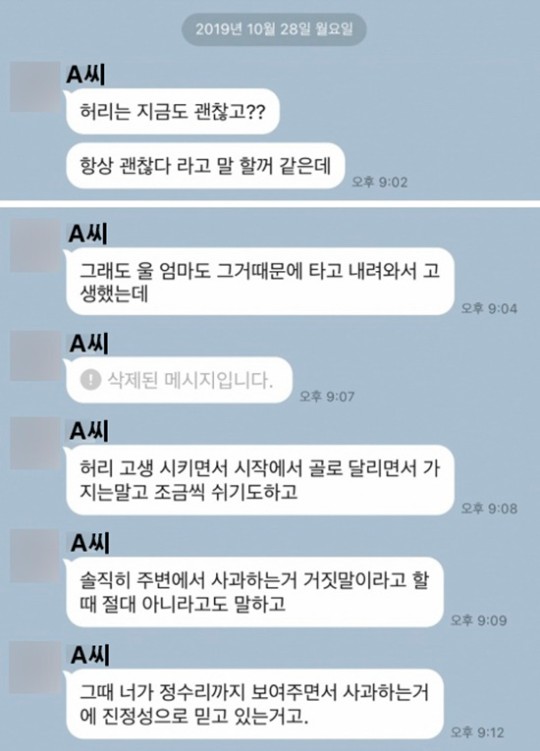 A: Don't go running from the start to the goal while struggling with your backache. you also take a little break (9:08).

A: I believe in sincerity that you apologize with bowing the top of your head. (9:12)

B has edited the test message. Except for the part "(apology) showing the top of the head," B captured only the part "crossing the legs, looking at the windows". This is the evidence of "no sincerity" presented by B. 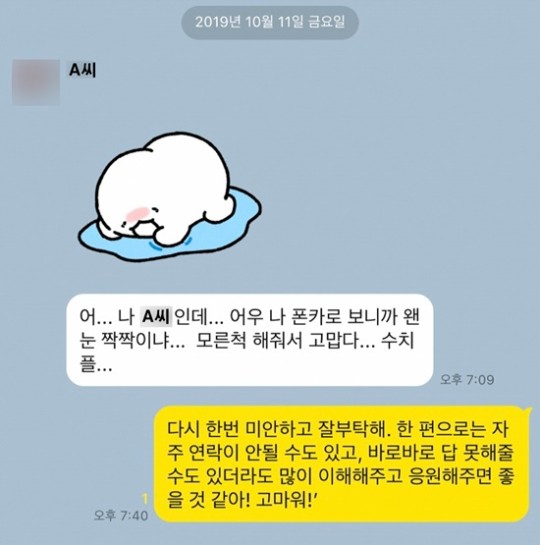 Then, what was the afternoon of October 11, 2019 when Taeyoung met with A the first?

A: I am OO. Oh, When I look at my cell phone camera, my eyes are uneven. Thank you for pretending not to know.

Taeyong: I'm sorry once again. On the one hand, I may not be able to get in touch often, and even if I can't reply you right away, it would be good to understand me and please cheer me a lot. Thanks 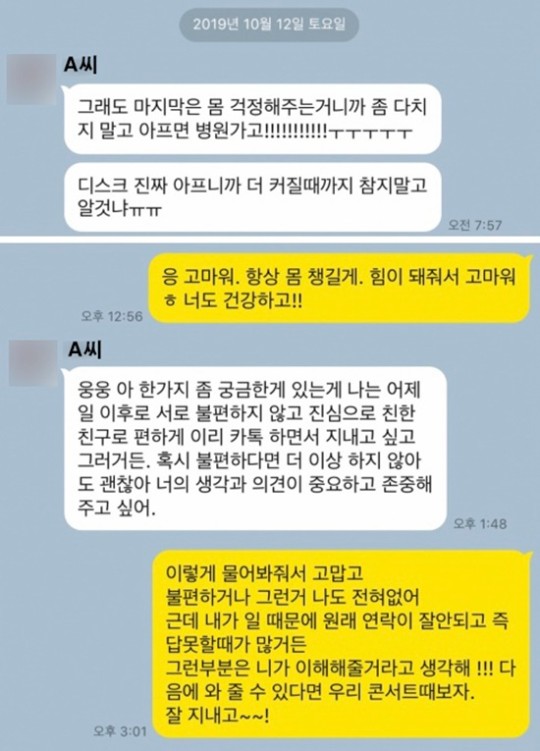 The conversation continued on October 12, 2019.

A: The disc really hurts, so don't hold it in until it gets bigger. ㅠㅠ

Taeyong: Yes, thank you. I'll always take care of myself. Thanks for your support.

A: Since yesterday, I've been wanting to stay comfortable with each other as close friends. If you are uncomfortable, you don't have to. Your thoughts and opinions are important and I want to respect you.

Taeyong: Thank you for asking me this question. But because of work, I can't get in touch well and I often can't answer immediately. I think you will understand that!! See you next time at the concert.

Taeyong: Hi! I'm Taeyong. How are you?

Taeyong: That's right ^^ I was supposed to invite you to the concert last time. But because of Corona, I couldn't do a concert, so I performed online. It's on Sunday at 3 pm and you can watch it on V LIVE. I will send you the code tomorrow or the day after tomorrow. Will it  be the time to play baseball? See you when you have time.

On May 17, he also delivered the concert code number.

Taeyong: I was going to invite you to a concert, but that's too bad. In the V app, there's a code entry product if you go into the store and search. You can just type the below code. KSJ20OMJ21.

A: I see. These days, you're performing in a new, non-face to face. Good luck!

Taeyong: Yes, thank you. Take care of your health. 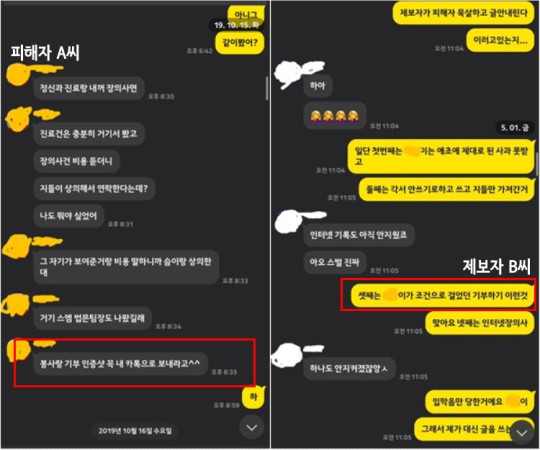 B also pointed out the mismatch between Taeyong's words and actions. Taeyong promised to donate continuously. In an interview with a media, B said, "We don't know if donations and services have been done properly." 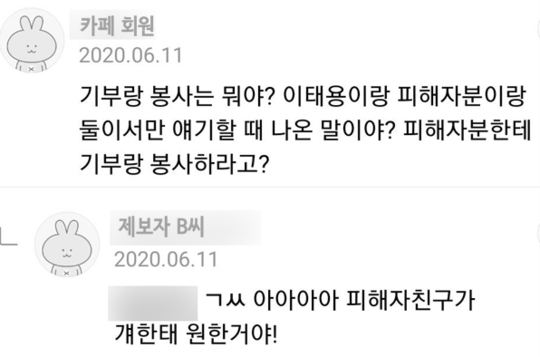 B mentioned it again on the bulletin board of the Internet cafe.

B: The victim friend wanted him(Taeyong) to volunteer.

According to the report by Dispatch, Taeyong has donated more than 1 million won a month since April 2016. The donation amount exceeded more than 50 million won. He also served in groups for underprivileged students.

The following are Taeyong's volunteer activities and donations. 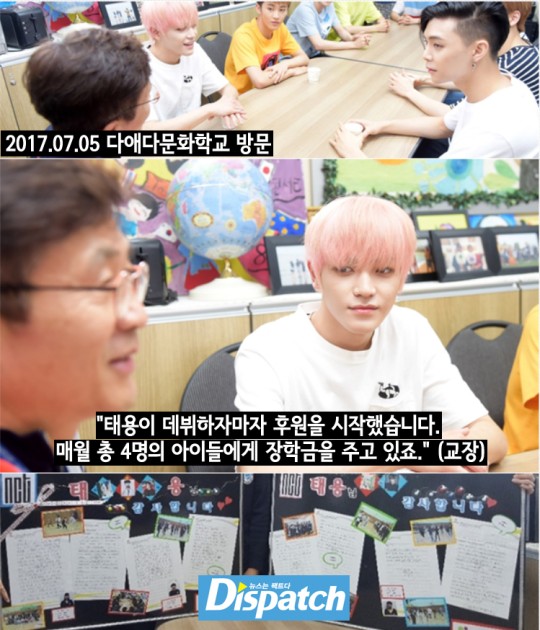 - March : Volunteer work to improve the residential environment of the Bondong Welfare Center

- April : Donate talents to meet with writers with developmental disabilities

September 2016 ~ Present : Donate more than 1 million won per month to All Love School 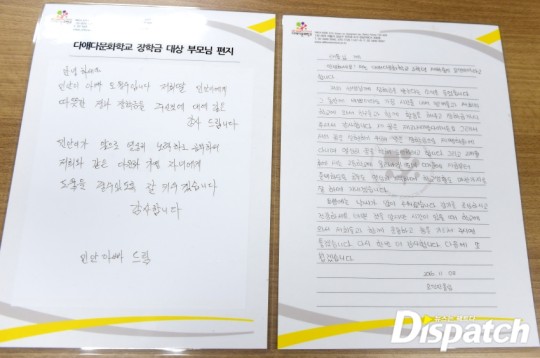 Dispatch covered NCT's volunteer work in July 2017. At that time, It was the words left by the principal of All Love School.

"Taeyong is sponsoring the children. Everyone wants to get the Taeyong scholarship. Taeyong said it carefully. He doesn't want the donations to be made public because the children may grow up and suffer because of himself. The amount is not important. I didn't think about donating for the scholarship at Taeyong's age."

Lastly, it is a fact check.

In the middle school years, Taeyong deprecated his friend's appearance. It is true. Victim A was hurt by the comment. This, too, is true. B said that he would correct the (Past) fault. This is also correct.

That's it, the core of the controversy over Taeyong. The rest is twisted. For example, the gay disparity and self-harm disturbances were distorted. This is the only claim by B.

"As a teacher, I remember exactly what happened at that time. Taeyong has nothing to do with the self-harm disturbance. I can tell with a teacher's conscience." (Teacher)

At that time, on site witnesses were also found.

"I was there. Taeyong never acted in trouble. It is not true that (the victim) threw a chair at Taeyong" (witness C). 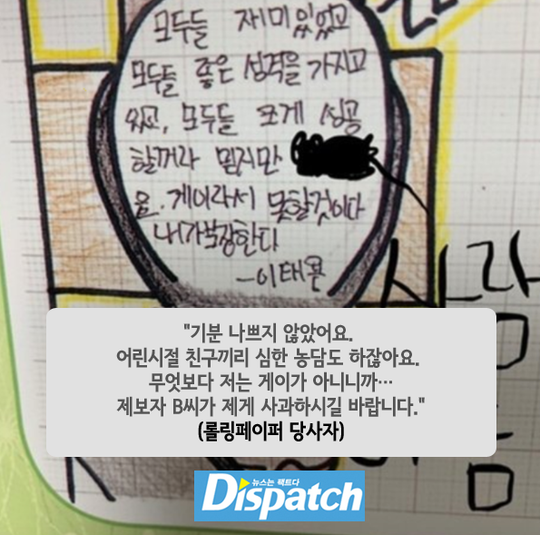 'Dispatch' also met with a party of remarks against sexual minorities. Rather, he accused B of reporting his "rolling paper" without permission.

"I don't feel bad. It's a childhood. You're joking with your close friends. Above all, I'm not gay, so I didn't care at all. But B is very unpleasant. I don't have a face-to-face encounter with B. I don't know him. He just posted my rolling paper on my graduation album without my permission. If you read this article, please find out my contact number and apologize for it."