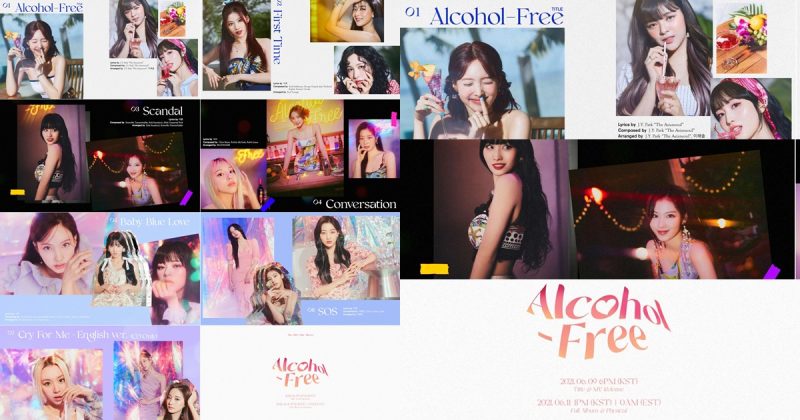 TWICE has come up with new album spoiler.

JYP Entertainment released the highlight medley of the new album ‘Taste of Love’ on the official SNS channel at midnight on the 9th, and is ready to capture the hearts of fans around the World.

Seven songs to be included in the album were opened first. The title song ‘Alcohol-Free’, ‘First Time’, ‘Scandal’, ‘Conversation’, ‘Baby Blue Love’, ‘SOS’, and ‘Cry For Me’ in English version.

First, ‘Alcohol-Free’ is a summer song that combines bossa nova hip- hop and expresses TWICE’s unique colors. The lyrics contain a magical moment of falling in love that brightens the whole World.

The 2nd track ‘First Time’, it was written by Jihyo alone. She expressed the excitement she felt for the other person for the first time and her feelings of being immersed in her own happiness.

Dahyun participated in writing the lyrics for the other song ‘Scandal’. It is a charming song that compares the burning moment when people starts to fall in love.

‘Conversation’ boasts a sexy mood with a unique bass flow. Sana took charge of the lyrics and put her heart towards the other person in the lyrics.

‘SOS’ is a song that Dahyun participated in writing the lyrics. A refreshing yet dreamy atmosphere showed. In addition to this, there was an English version of ‘Cry For Me’.

Meanwhile, TWICE will officially release the mini album ‘Taste of Love’ at 1pm on the 11th. Prior to this at 6pm on the 9th the title song ‘Alcohol-Free’ sound source and music video will be released.